The full title of the book is “The Entrepreneurial State: Debunking Public vs. Private Sector Myths“, and the author is Mariana Mazzucato, Professor in the Economics of Innovation and Public Value at University College London (UCL), and Founder/Director of UCL’s Institute for Innovation and Public Purpose.

Early on in the book, she makes the strongest case there is to be made for her thesis, by arguing that the United States of America has known this, and practiced this, for years on end. The rest of the world, she says, would do well to emulate the USA:

If the rest of the world wants to emulate the US model they should do as the United States actually did, not as it says it did: more State not less.

LOCATION: 372 (Note that the location refers throughout to the Kindle version)

There are a lot of excellent reviews out there already. See this one in the New York Times, for example. It is a mostly favorable review. Or, if you want a slightly more critical one, see this one in The Guardian. Indeed, there are many others out there.

I want to focus on three key points in this essay: horizons, incentives and spillovers. Let’s tackle each in turn.

Moonshots is a word that has become increasingly popular over the last two decades, and it refers to projects or even ideas that have a relatively low chance of succeeding. The payoff, if these ideas succeed, is so large that that it may compensate for the relatively low probability of this actually happening. That, of course, is exactly what expectations are all about.

But for a firm, particularly one that may not have the luxury of time and money on its side, placing bets on projects that may not work out – and indeed most of them will not – is a rather risky thing to do. Money is an obvious constraint, but a less obvious one is time.

Firms just do not have the luxury of waiting while a project turns out to be successful… eventually. These kind of moonshots, then, are perhaps best handled, for this specific reason, by the state.

In fact, the point is even more nuanced, because a firm is much more likely to (if at all) invest in a moonshot project based on a specifically desired outcome. The word project itself is an indication of this fact – this is not “blue sky research” that we are talking about.

But blue sky research is important!

A core difference between the US and Europe is the degree to which public R&D spending is for ‘general advancement’ rather than mission-oriented. Market failure theories of R&D are more useful to understand general ‘advancement of knowledge’–type R&D than that which is ‘mission oriented’ (Mazzucato 2015). Mission-oriented R&D investment targets a government agency programme or goal that may be found, for example, in defence, space, agriculture, health, energy or industrial-technology programmes (Mazzucato and Penna 2015).

Governments need to focus, for the sake of their own economies, their domestic firms and their long term growth, on focusing on moonshot projects, precisely because firms are reluctant to do so. The state needs, in other words, to take risks that private firms will not.

Saying this is easy, but how to go about doing this?

That is, if governments need to tackle long-term low-probability-of-success and uncertain-outcome initiatives that are important, but unlikely to be taken up by the private sector, the question that then arises is: how?

Mazzucato offers two points in this regard that I found interesting:

Block (2008, 188) identifies the four key characteristics of the DARPA model:

1. A series of relatively small offices, often staffed with leading scientists and engineers, are given considerable budget autonomy to support promising ideas. These offices are proactive rather than reactive and work to set an agenda for researchers in the field. The goal is to create a scientific community with a presence in universities, the public sector and corporations that focuses on specific technological challenges that have to be overcome.

2. Funding is provided to a mix of university-based researchers, start-up firms, established firms and industry consortia.

3. There is no dividing line between ‘basic research’ and ‘applied research’, since the two are deeply intertwined. Moreover, the DARPA personnel are encouraged to cut off funding to groups that are not making progress and reallocate resources to other groups that have more promise.

4. Since the goal is to produce usable technological advances, the agency’s mandate extends to helping firms get products to the stage of commercial viability. The agency can provide firms with assistance that goes well beyond research funding. Part of the agency’s task is to use its oversight role to link ideas, resources and people in constructive ways across the different research and development sites.

In effect, she is suggesting that government alone cannot do this, it needs to be a “scientific community” that is decentralized, has autonomy, sets the agenda, and applies Darwinian principles (see point 3). Hmm, sounds familiar. Different context, but a similar lesson!

And elsewhere in the book, her example of how Japan did this in the 1970’s is instructive:

The general point can be illustrated by contrasting the experience of Japan in the 1970s and 1980s with that of the Soviet Union (Freeman 1995). The rise of Japan is explained as new knowledge flowing through a more horizontal economic structure consisting of the Ministry of International Trade and Industry (MITI), academia and business R&D. In the 1970s Japan was spending 2.5 percent of its GDP on R&D while the Soviet Union was spending more than 4 per cent. Yet Japan eventually grew much faster than the Soviet Union because R&D funding was spread across a wider variety of economic sectors, not just those focused on the military and space as was the case in the Soviet Union. In Japan, there was a strong integration between R&D, production and technology import activities at the enterprise level, whereas in the Soviet Union there was separation.

So, bottom-line: the state has to get in this business, but it can’t “go” it alone. There needs to be a community of academicians, researchers, firms, scholars – and as the example of Japan shows, this community needs fostering, and horizontal collaboration.

Or, if you prefer to put it simply, this is going to be hard.

Academia suffers from the same problem that government bureaucracy does in India: the incentives are all wrong. Both are about risk minimization.

A professor in a college has no incentive to try and do something new, something risky, something innovative. Why, if you think about it, should she? Your best case scenario is that it works, but you get no upside for it: remember, wages aren’t a function of what you do, they are a function of how long you have been in the system. Your worst case scenario is that what you tried to do blows up in your face. So why take the risk?

I’m all for the state being more entrepreneurial. I buy into the idea. But I worry, especially in a country like India, about the feasibility of it, for hey, incentives matter!

In a blogpost I had written earlier this year about the budget, I had touched upon this point:

“Is there a solution? Yes, railway engineers of old like the metro builder E Sreedharan, builders of government companies like D V Kapur and V Krishnamurthy, and agricultural scientists like M S Swaminathan have shown how they made a difference when given a free hand. Vineet Nayyar as head of Gas Authority of India was able to build a massive gas pipeline within cost and deadline in the 1980s. The officers who are in charge of Swachh Bharat and Ayushman Bharat, and the one who has cleaned up Indore, are others who, while they may not match China’s speed, can deliver. Perhaps all we have to do is to spot more like them and give them a free hand.”

And so what we need to study and copy from China is not so much anything else, but lessons in achieving, and sustaining, excellence in government bureaucracy. Or, if you prefer, how to improve state capacity.

That point resonates even more in this context: fostering an ecosystem led by the government is dead in the water without either the proper incentives, or at least bureaucrats who are able to work through poorly designed incentives. It is a hard problem, state led entrepreneurship, and made harder by the problem of incentives.

Or externalities, if you prefer. It doesn’t matter how hard the problem is, the payoffs are worth it!

If those GPT’s are the outcome of general, as opposed to specific, R&D, sign me up. They are magnificent positive externalities. Indeed, elsewhere in the book, Mazzucato points to how almost everything produced by Apple today simply could not have been produced without an entrepreneurial state: 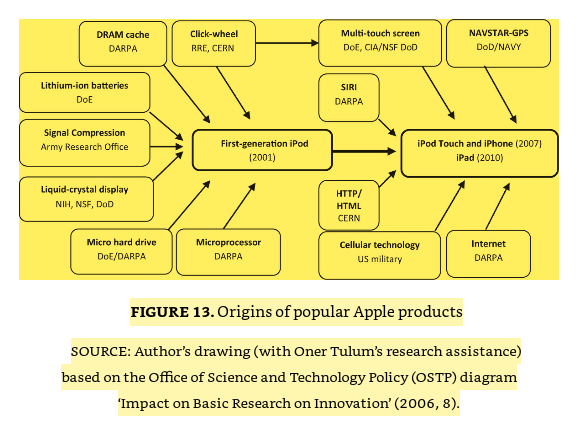 The final point that I’ll make relates to how Mazzucato proposes “capturing” some of these externalities:

Where an applied technological breakthrough is directly financed by the government , the government should in return be able to extract a royalty from its application . Returns from the royalties , earned across sectors and technologies , should be paid into a national ‘ innovation fund ’ which the government can use to fund future innovations . Granting a return to the State should not prohibit the dissemination of new technology throughout the economy , or disincentivize innovators from taking on their share of the risk . Instead it makes the policy of spending taxpayers ’ money to catalyse radical innovations more sustainable , by enabling part of the financial gains from so doing to be recycled directly back into the programme over time .

Mazzucato does present alternative schemes to the one shown above, but this is the one that strikes me as being the one with the most promise, if administered well, with appropriate risk-mitigation built in. But again, saying that is much easier than actually getting it done.

But all the being said, one simple fact is inescapable: India needs to be thinking about how to get something like this off the ground, and ASAP.

For that reason alone, more of us should be reading this book.

One thought on “Reflections on The Entrepreneurial State, by Mariana Mazzucato”